Since Sunday 29th September, 2019, following the final race in Hockenheim, it‘s official: Christof „Fifty“ Höfer #73 and Nate „N8!“ Kern #12 Wunderlich MOTORSPORT have brought home the trophies for first and second place the from the newly established, popular and hotly contested BMW BoxerCup championship, which was raced on Europe‘s legendary motorcycle race courses. At home means in the new Wunderlich company headquarters at the Innovationspark Rheinland in Grafschaft-Ringen.

Frank Hoffmann, managing director Wunderlich GmbH and team manager Wunderlich MOTORSPORT:
„We celebrate together with „Fifty“, who was crowned the BoxerCup Champion 2019, and „N8!, who brought home the vice championship. We would like to sincerely congratulate both of them on their outstanding team performance. Both race riders have motivated themselves in every race this season with grit and passion, but have always fought fairly and captivated the public. „Fifty“‘s championship victory wasn‘t a done deal by any means, but he found a well-matched opponent in „N8!“. „N8!“, our American warhorse, is an old hand at Boxers and is the most clued up on their special peculiarities. „Fifty“‘s advantage on the other hand lies in his extraordinary knowledge of various courses. Despite the necessary rivalry, the two of them have grown as sportsmen into a real team. We have achieved our goal, that‘s why we sent two high-quality riders to the races to start with, so we end up with two men right up front in the final accounting. And things really did go that way in the end, and I am very grateful for that. A great team performance! The riders also harmonised and worked perfectly with each other, and we‘re looking ahead to the future with a positive attitude. We‘ll let you know whether we‘ll be carrying on and how we do that in the coming months. And here‘s what I‘m most happy about: this championship and vice championship are important to us and come just at the right time for the opening of our new company headquarters in the Innovationspark Grafschaft-Ringen. Now we have TWO reasons to celebrate!“

Christof Höfer, champion of the BoxerCup 2019:
„I‘m pretty speechless right now. It was a superb season. Nate and I fought all out and I was able to stay true to my course - throughout the entire season. I was able to maintain concentration. I got attuned to the Boxers brilliantly over the season and it made me more versatile when you look at the whole year. Today was simply the finale in front of family, friends, in front of so many people. It‘s a home race and it makes you simply want to rock the race. Yeah. Double victory and champion. I almost hit the ground in the Sachs bend in that last round and then you speed over the finish line as the winner and it just all bursts out of you - sick!“

Nate Kern, runner-up of the BMW BoxerCup 2019:
„I really wanted to stand out in this last race. What can I say - my problem with the arm pump... it was gone. I don‘t believe in miracles, but that was definitely magic! I got this Motocrumb and just smeared it on my arm and I had zero arm pump issues from start to finish. Honestly, the Wunderlich team, Frank Hoffmann, they all believed in me, my supporters from home too - Sebastian, Peter, Christian - everyone! I can‘t stress enough how much I appreciate all this support, this dream that I‘ve lived out here is gonna stay with me forever. I hope I can come back next year and win the championship, I would love to have that chance!“

No victory, no success without the pit crew!
One thing is clear: You can only have victories and successes if your team meticulously prepares the race bikes in the background, completes the stops during the race in a routine way and makes lightning-fast decisions about what to do in the event of technical challenges. The core of our pit crew consists of three calm, experienced, technically decorated and competent men: Sebastian Klettke, Peter Schwellenbach and Christian Schmidtke. 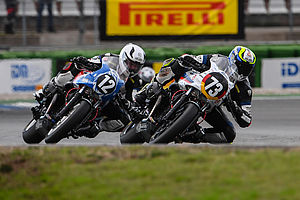 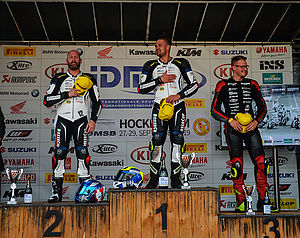 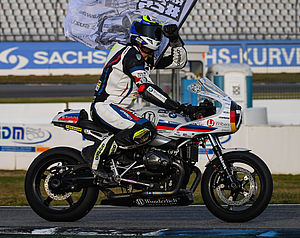 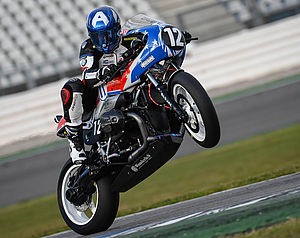 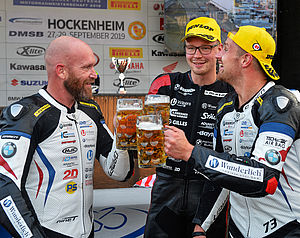 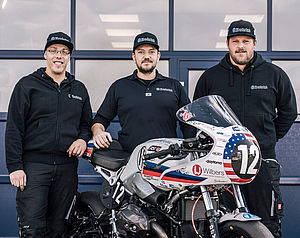