On 1 March 2021, Frank Hoffmann will celebrate his 10th anniversary at Wunderlich GmbH. Since 2015, he has been managing director at the renowned, internationally successful company alongside the company's owner and founder Erich Wunderlich.

The success is no coincidence, because Frank Hoffmann "lived" the motorbike long and intensively before his time at Wunderlich. A distinction is generally made between professional motorbike technicians and gifted motorcyclists. The former are dedicated to the fascination of technology and exhaust its possibilities to the limit in order to constantly develop it, while the latter are called to ride motorbikes. And they, too, test the limits. What they both have in common is that they always stretch what is possible with intuition and anticipation, because that is the only way to make progress. In Frank Hoffmann, both talents are combined in the best possible way - even beyond the motorbike.

With this "basic equipment" of characteristics, he joined Wunderlich GmbH on 1 March 2011 and initially dedicated himself to product development and the construction of the in-house dynamometer. In the further course, Erich Wunderlich entrusted him with the management of the overall development as well as the workshops. Frank Hoffmann was able to do both here: contribute his experience and gain further valuable experience. And set impulses. With the constant penetration and consistent adaptation and further development of the company's processes, he took on further responsibility in Wunderlich's management. Due to the successful business development and his distinctive technological know-how, Frank Hoffmann was appointed authorised signatory at the end of 2013 and subsequently appointed managing director by Erich Wunderlich on 3 February 2015.

Erich Wunderlich and Frank Hoffmann complement each other perfectly. Not only in business, but also on a human level, which strengthens and consolidates mutual trust. In addition to the remarkable development of turnover and personnel, they have driven forward the international orientation of the company over the past 10 years and expanded the value and appeal of the brand worldwide. The fruitful work is visible in the new company headquarters in the Innovationspark Rheinland in Grafschaft-Ringen/Germany, which has been occupied in 2019. Here, the company, which was founded by Erich Wunderlich in a garage over 35 years ago, now offers a secure workplace to almost 100 highly qualified employees. The fact that Wunderlich's thinking is multi-dimensional and always customer oriented is exemplified by the Wunderlich BLAU sustainability initiative. Thus, the development of the company has been going in one direction for 35 years: in a direction characterised by solid, healthy growth and technical and entrepreneurial innovations.

Erich Wunderlich: "As Managing Director, Frank always reminds me of the endurance professional deep inside him. Even more so after 10 years of working together. Just like in endurance racing, courage, determination, stamina, mental strength and the everlasting sharpened eye, the intuition, the sense for potentials are among his outstanding qualities. But also the wise pause, because he does not only keep his eyes on the next bend, but also on the goal. I would like to thank Frank for our trusting cooperation, his diverse achievements for Wunderlich and I look forward to our further journey together!"

In addition to his appointment at Wunderlich, Frank Hoffmann continues to advise renowned teams in the EWC (Motorcycle Endurance World Championship) to this day. 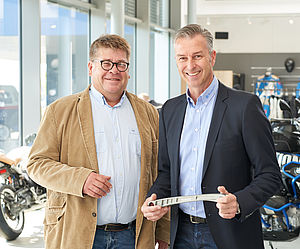 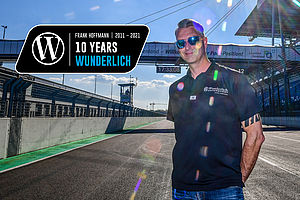