After the cancellation of Pikes Peak, Wunderlich MOTORSPORT is committing itself to the long distance world championship.

As of now, Wunderlich MOTORSPORT will be committing to the FIM Endurance World Championship - the Long Distance World Championship for motorcycles - and at the same time support the vice champion of the Superstock class, the German Endurance Racing Team „GERT56“. Following the cancellation of the motorcycle class at next years Pikes Peak International Hill Climb, Wunderlich continues to place great importance on its commitment to MOTORSPORT. And since GERT56 is active in the Long Distance World Championship at the highest level, trusting in the BMW motorcycle brand in the process - and even includes the Wunderlich MOTORSPORT Pikes Peak racer, Lucy Glöckner, in its team - a collaboration between the two was the logical next step.

The name „Lucy Glöckner“ in particular has long since established itself in the long distance scene, but especially since the Bol d‘Or 2017. At that time, Glöckner was also riding a BMW as part of the NRT48 team; it was the team‘s first participation in the „large“ Superbike class. In the last few metres, Glöckner fought the #111 Honda for the last place on the podium and only admitted defeat following minor contact with a lapping team in the last few metres by less than a second.

GERT56, based in Pirna in Saxony and situated not far from Dresden, recently celebrated great successes in its team‘s history. A year ago, the trio of riders led by team head Karsten „KW“ Wolf took top spot on the podium as class champions at the Bol d‘Or. During this year‘s finale in the Stock category of the home race in Oschersleben, the team lost the WC title to the competition at the end by exactly one second. Now they want to rectify this mistake in the 2019/2020 season.

In the Long Distance World Championship, a season lasts more than one year, which is why the season launch for 2019/2020 is taking place on 21/22 September. The fight for the legendary „Golden Bowl – Bol d‘Or“ will be waged on the southern French slope of Le Castellet over 24 hours. GERT56 will be there together with Stefan Kerschbaumer from Austria, Pepijn Bijsterbosch from the Netherlands and Lucy Glöckner from Germany.

Frank Hoffmann (Managing Director of Wunderlich GmbH, Team Manager of Wunderlich MOTORSPORT): „After having been so successful at Pikes Peak and achieved significant continuous improvement since 2017, it is a real shame for us that the event organisers have cancelled the Pikes Peak International Hill Climb for the coming year. And yet it quickly became clear to us that we will continue to commit ourselves to MOTORSPORT. The Hill Climb is a type of extreme motorcycle sport, just like the long distance sport, which we‘ve always been passionate about. Lucy Glöckner has taken the starting position for us in the Pikes Peak race twice now and we at Wunderlich are known for our dedication to developing high-quality components exclusively for BMW motorcycles. That‘s why building a bridge to GERT56 with Lucy was obvious. And GERT56 has more than demonstrated that it belongs amongst the best of the best in this challenging international series. This is a position that we share. Which is why we are looking forward to collaborating closely with Karsten Wolf and his outstanding team in the upcoming season“.

Karsten Wolf (team manager for GERT56): „In collaborating with Wunderlich, we welcome an additional, strong partner aboard. We are a small, private team that invests in all of this with a lot of love, passion, but especially strong friendship, and if we can then „stick“ a global player brand like Wunderlich on our BMW S 1000 RR as a partner, that not only fills us with pride but above all fills our entire, small, ambitious team and all of our many fans out there with pride too. An expanding series like the FIM Endurance World Championship perfectly fits Wunderlich‘s roadmap towards adding additional, international markets. With our trio of riders from three nations, as well as the races in Europe and Asia, we are the best brand ambassadors“. 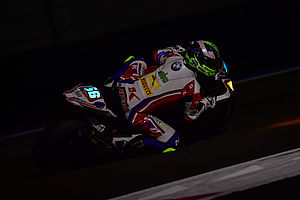