The Wunderlich MOTORSPORT Team and its riders Nate N8! Kern #12 and Christof “Fifty” Höfer #73 took part in the third round of the 2019 BMW Motorrad BoxerCup promoted by Wilbers at the Schleizer Dreieck last weekend, with both earning a race win each.

The race track of “Schleizer Dreieck” is the highlight of the season in the “Internationale Deutsche Motorradmeisterschaft” (IDM) with ten thousands of fans attending the specatular races at Germany’s oldest street racing circuit. The 3.805 kilometre long triangular course is a combination of public roads with gravel traps plus a motodrom section. It is the race of the year in the IDM with most fans coming to here.

So Nate Kern from USA and Christof “Fifty” Höfer from Hessen presented themselves highly motivated to hold the Wunderlich MOTORSPORT flags as high as possible to the Schleizer sky. Already in qualifying both proved to be quick with Kern earning the pole position by only 0.107 seconds in front of his team mate Höfer. Both were unreachable for the opponents.

And again both should be battling it out in race one for the victory with team boss Frank Hoffmann watching the on goings nervously. Höfer did take a bad start and had to fight his way back to Kern. After that, both were changing the leading position in a permanent way with the final decision only to be made on the last lap. Kern took his first BMW BoxerCup race win of the season.

In the second race both, Kern and Höfer, did not take a good start and it was only in lap two when both were again touching the leading positions. Höfer studied his team mate until mid race and then took over at the front and rode through to his fourth win of the season. But it was not a easy cruising for Kern who got a new opponent in Marvin Jürgens – whom he had to take under control during the last laps.

Three out of six BMW BoxerCup rounds are in the books, meaning Höfer leads with 120 points by half time of the season. Team mate Kern (85 pts.) trails him by 35 points, with Jürgen being one behind Kern.
The next race of the BMW Motorrad BoxerCup promoted by Wilbers is to be held from 09. to 11. of August at the Automotodrom Most (Czech republic).

Christof Höfer:
“It has been an unbelievably great weekend at Schleiz – as always! Around 30.000 people attended the event and the atmosphere simply was mega. Fans at Schleiz are celebrating motor racing and it is always a honour to be riding there. Nate and myself were battling to the fullest. Especially in race 1 we were changing positions almost in every corner and nothing separated us. I went to the last lap leading but then he took me coming into the ‘Seng’ corner in sixth gear flat out – I did not expect that move and he took the win and deserved it. So I wanted to win the second race so badly to give my fan club, friends and family something to cheer about. It was another brilliant fight and at the end I could pull a gap. It was also good to see Marvin Jürgens taking us on a fight so we will expect some harder fights and competition in the future.”

Nate Kern:
“What a weekend, what a race track! It was my first time at Schleiz and the fans are outstanding. The track itself was not a problem, we got some more dangerous tracks in the US. It was fun, a proper men’s track. Of course I am happy with my first win and another second. It’s also nice to see some more people mixing is up at the front with us and it will not only be Fifty and me fighting anymore. That’s how it is supposed to be. I am looking forward to our next race in Most already!”

Frank Hoffmann:
“Of course it is a perfect weekend when your riders take home a 1-2 twice – but as team manager you are also happy when everything is over and all are back to the pits safe and sound. Nate and Fifty did not make any presents to each other at all, so you can only bite your nails and hope. But both are experienced racers and know what they are doing. It is also nice to see they got some further competition out there, it is always good to have competition. Both underlined their position in the championship and exceeded their lead. We are very happy.” 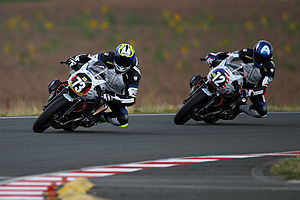 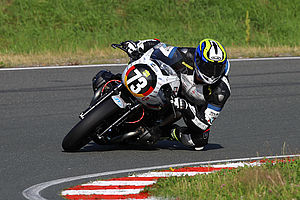 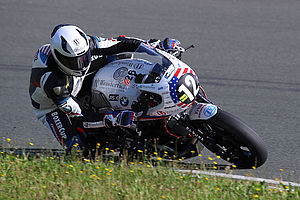 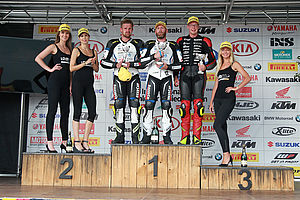