Wunderlich MOTORSPORT and the German Endurance Racing Team 56 (G.E.R.T.56) are taking new directions together in 2020. As the FIM Endurance Superstock World Cup Vice Champion, there can only be one goal in the long-distance championship: bringing the title to Germany. With this in mind, Wunderlich ambassador Lucy Glöckner will complete a guest start in the Internationalen Deutschen Motorradmeisterschaft (IDM: International German Motorbike Championship) with her „home race“ at the Sachsenring. The team applies with Lucy Glöckner for a wildcard for the German comeback of the FIM Superbike World Championship at the Motorsport Arena Oschersleben.

Wunderlich MOTORSPORT and GERT56 have been working together since the start of the FIM Endurance World Championship 2019/2020. They‘ve already bagged the highlight of a spot on the podium: in the team‘s first Asia appearance, they managed to bring home second place in the Superstock class during a tough and rainy race in Sepang, Malaysia. On the EWC side, the team will be bolstered by the addition of Toni Finsterbusch as reserve rider at Le Mans – a guest start is already planned for Toni at IDM.

From the huge team inventory, Rico Löwe will participate for GERT56 for the fourth competition this year to take to the starting line at the Frohburger Dreieck as he competes in the International Road Racing Championship (IRRC). Löwe has already stepped up to the podium multiple times in this race.

The calendar for Wunderlich MOTORSPORT and GERT56 couldn‘t be any fuller in 2020: in mid-April they will be racing their bikes for 24 hours in Le Mans. There the riders will be battling on the tried and tested BMW S 1000 RR, which recently secured the team second place on the podium in Sepang. The successful trio of Lucy Glöckner, Stefan Kerschbaumer and Pepijn Bijsterbosch will also continue racing. Riding beside them is the Saxony native Toni Finsterbusch, who will join the team in France as their fourth rider.

Glöckner will then tackle the IDM Superbike class during a guest start at the Sachsenring at the start of May. A new BMW S 1000 RR that meets all the regulations will be built for the task. Kerschbaumer originally should have used this bike in the second IDM Superbike race at the Red Bull Ring in Austria, however he had snagged a permanent contract for the IDM as part of Team BCC. That‘s why the plan is to have Finsterbusch raced as a guest entrant at the highest class of motorsport in Germany. The exact dates haven‘t been determined as yet.

Both team highlights will take place at the Motorsport Arena Oschersleben. Up first is the finale of the FIM Endurance Superstock World Cup, in which the team hopes this year to narrow the gap from 2019. GERT56 drew equal on points with the world champions to bring back the vice champion title.

Wildcard in the WorldSBK
Lucy Glöckner will deploy for a wildcard on the same course in the Superbike World Championship, which will take place on the first weekend in August. Glöckner can easily be described as the fastest woman in the world, having already more than held her own battling it out against her male colleagues in many competitions. She has the pace to keep up with the cream of the crop in the EWC Superbike class at the Long Distance World Championship. Glöckner took second place with Wunderlich MOTORSPORT at Pikes Peak and is the fastest woman in the world in this race too.

Another new BMW S 1000 RR is being built for the Superbike World Championship – all in line with WorldSBK regulations. The development and preparation for this new bike will be handled by RS Speedbikes, headed up by Ronny Schlieder and Falko Gierth. There are plans for an extensive series of tests for GERT56 and Glöckner to prepare them for the WorldSBK in the best way possible. External experts will also be called on for their help to make sure there aren‘t any errors in the details either. The team has already announced it will be taking new and innovative directions in terms of some components – completely within the context of Wunderlich MOTORSPORT, which will integrate the GERT56 „platform“ into the ongoing development of all products.

Lucy Glöckner:
„We have an exciting year ahead of us and I don‘t really know where to start. The long distance is probably the best! I love endurance, it‘s so much fun for me and you really do a lot of riding. We‘ve had two races ruined by the weather now, but we struck back with our podium position in the title fight at Sepang. And that‘s precisely our goal – the title in the stock! That‘s why we have to do everything we can in Le Mans to catch up and collect as many points as we can. But I‘m also looking forward to the guest start in the IDM at the Sachsenring – I‘d be lying, though, if I didn‘t call the wildcard in the Superbike WC in Oschersleben the absolute highlight of the year, maybe even my entire career to date. We‘re all aware that we‘re swimming in shark infested waters there. Nobody knows what might be waiting for us – except to say that the air is incredibly thin there. It‘s incredible how the whole team is behind this idea and how work is already progressing on building and tweaking this bike. That‘s why I‘m going to work on myself as well to be as fit and ready for this challenge as I can be. My biggest problem at the moment is that everything seems so far off and I‘d rather just get going right now! For me personally as an ambassador of the Wunderlich brand, it‘s naturally also a huge honour and very special that the company is involved in „my“ team and is thus behind all these great plans for 2020. Thank you Wunderlich, thank you GERT56!“

Stefan Kerschbaumer:
„Our GERT56 team is really a team – and not just in the long distance, where we‘re already in a pretty good position to be able to say a few things about the title. That‘s our main goal for this year. But Karsten Wolf and his team have also offered me a guest start in the IDM at my home race in Spielberg and we were agreed there too. Since I received a contract for the IDM at BCC, however, I got support there too. Nevertheless, I would like to say a big thank you to the whole team for the fact that they even took it into consideration! Us riders want to express our gratitude for that in Le Mans – and get back on the podium, naturally!“

Pepijn Bijsterbosch:
„GERT56 is always exciting! It was my first visit to the team headquarters in Pirna and at the „Sachsenkrad“ trade fair in Dresden. We also used this weekend with my girlfriend Laura to check out the beautiful city of Dresden. We had our team party on Saturday evening and spent Sunday at the trade fair. Naturally, we‘ve all been involved in the plans for IDM and WSBK for a while and we just feel at home here – if I hadn‘t planned on IDM, GERT56 would‘ve given me the opportunity guaranteed! But we do have a plan and that‘s to fight for the title in the Endurance World Cup, and I‘ll also personally give it my all to make sure we reach that goal!“

Toni Finsterbusch:
„I‘m very pleased to be joining GERT56. I‘ll be heading to Le Mans as backup rider and attempt to do my part to contribute to the team in training sessions. I know the title win is incredibly important to everyone here and that‘s why Karsten Wolf also wants to exclude all eventualities – you can always get hurt very fast in our sport so that‘s why he wanted to kit out the „reserve seat“ to a high calibre too. Even if I don‘t end up being called on in Le Mans, I am grateful to have this chance. And seeing how everything will come together, we‘ll also organise a guest start in the IDM with GERT56 and even that isn‘t a given. So I‘d like to extend my thanks here to the entire team.“

Karsten Wolf:
„We‘ve put a few emotional days and weeks behind us. GERT56 is only where it is today because all of the team members have given me the most important thing they have to give: their time. Calling this team a ‚team‘ would even be an understatement, because it‘s really become one big family. We have a lot in store this year, so let‘s see how everything plays out. Winning the title in the Endurance race is our most critical objective, but I‘m also especially looking forward to the wildcards in the IDM and WorldSBK. We‘re aware that all of this isn‘t going to be that easy. But who doesn‘t dare also doesn‘t win – you can only fulfil your dreams if you go after them. Lucy Glöckner is an incredible race rider and we really want to show that on the Superbike WC stage. Fans and partners can expect us to consistently exploit every possibility and chance in every single competition, but we also know our limits and that in turn puts us in a position to be able to set realistic objectives in the various competitions.“

Frank Hoffmann – Wunderlich MOTORSPORT:
„We‘ve been the EWC race partners for GERT56 for two races now and don‘t regret taking that step one bit! They were two difficult races with freak weather and cancellations, which we haven‘t seen yet in the long distance – and the team is currently in third place on the WC table and graced the podium in Malaysia. Karsten Wolf is an incredible „doer“ and you can sense his passion for motorsport. But when he came knocking with ideas for IDM and WorldSBK – and with our brand ambassador Lucy Glöckner, no less – naturally we got on-board with those projects from the get go as well.“ 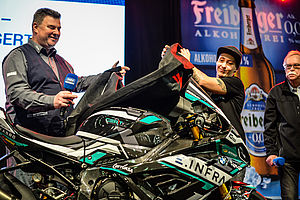 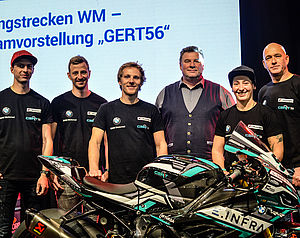 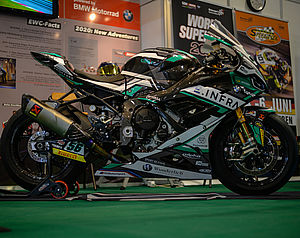