It's good that BMW has remained true to itself in this project. This is not really the case with this project. Quite a few people feel awe when they face it for the first time. There is no project, there is an appearance that is already imposing and strong in character at first glance. In the versatile BMW program, it already looks like an unshakable solitaire.

As a friend of the brand, it takes a bit of getting involved with the motorcycle and the genre attributed to it: This is a cruiser. A cruiser that interprets and celebrates the theme through and through in the style of the house. A Cruiser, which is not to be compared at all with the faded creamy, or should one say eggshell-colored, predecessor, which should have staked the claim already 20 years ago and failed with it. Afterwards one is always wiser.

If you approach the BMW R 18 and get involved with it, the fascination that emanates from this motorcycle is very complex. It concerns the brand, the authenticity, it concerns the philosophy, the appearance and it concerns the history of BMW. 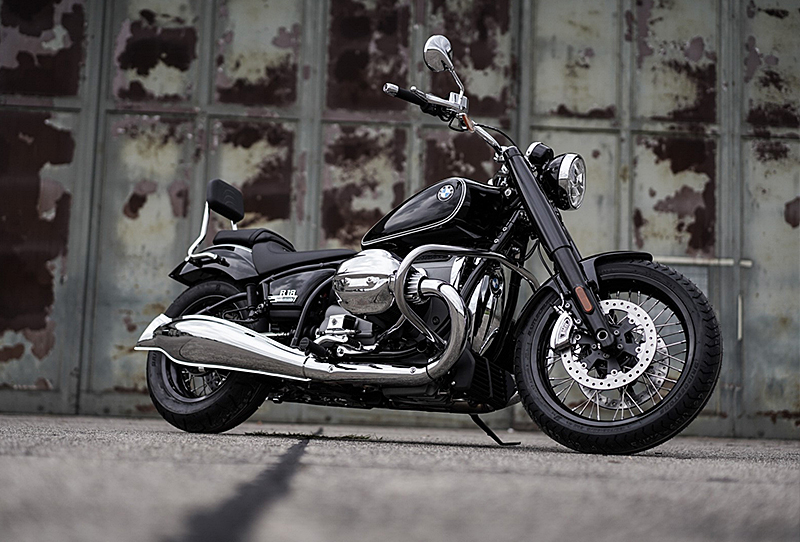 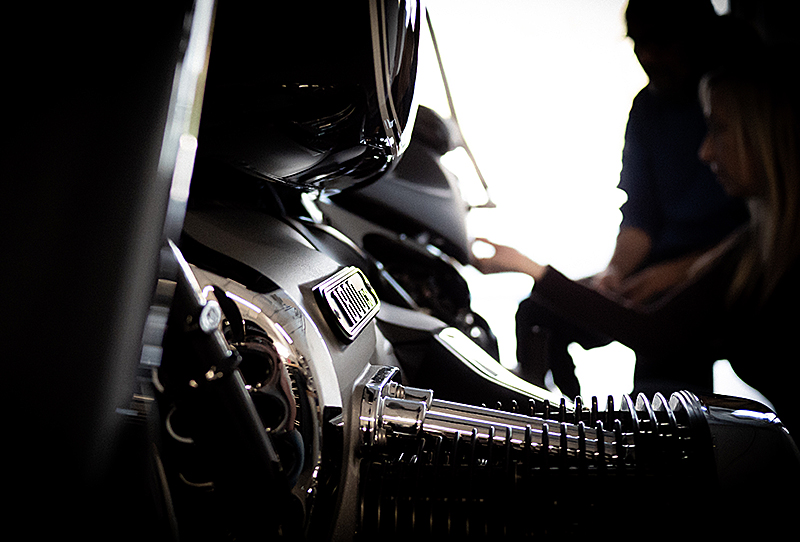 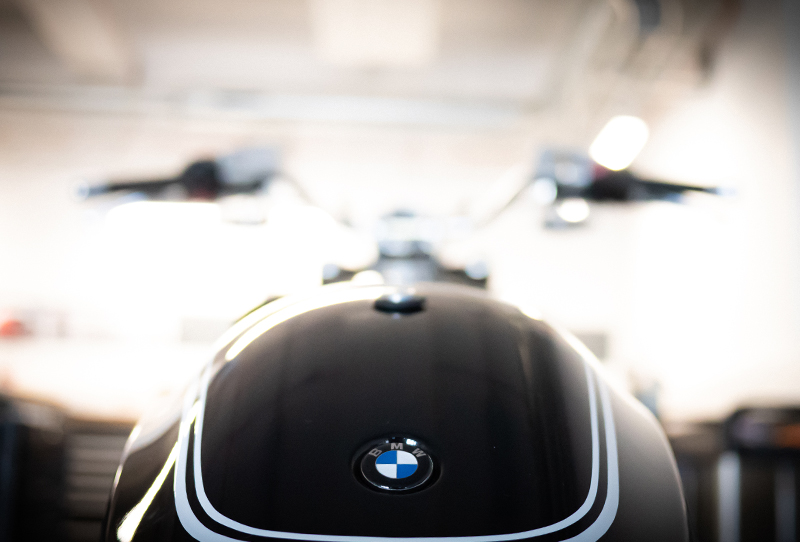 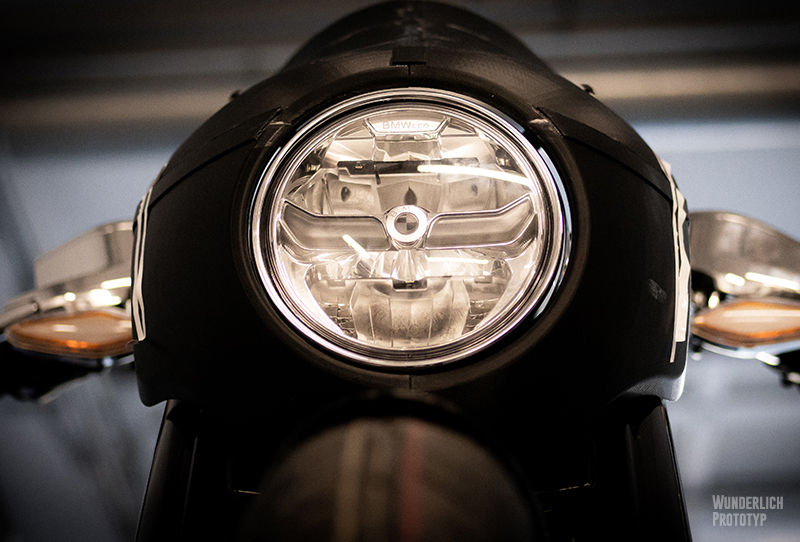 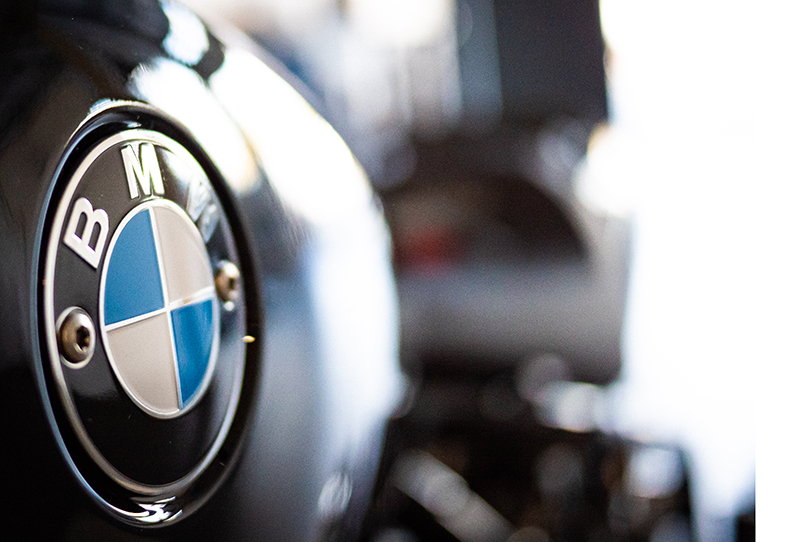 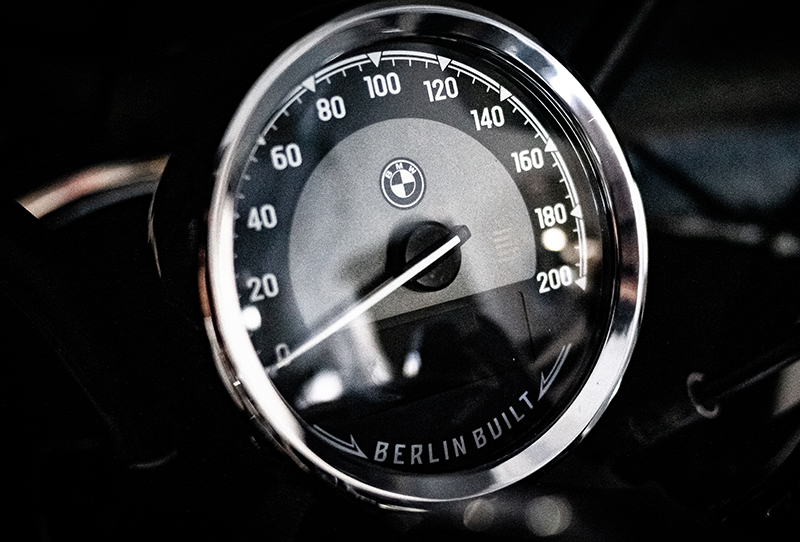 This BMW is heavy, almost seven hundredweight. The visible and haptic quality impression speaks for itself. But it is only in harmony with the palpable weight that one grasps the essence of this BMW: its value. Seven hundredweights that can be handled with ease thanks to the low seating position and wide handlebars. When stationary and when cruising. 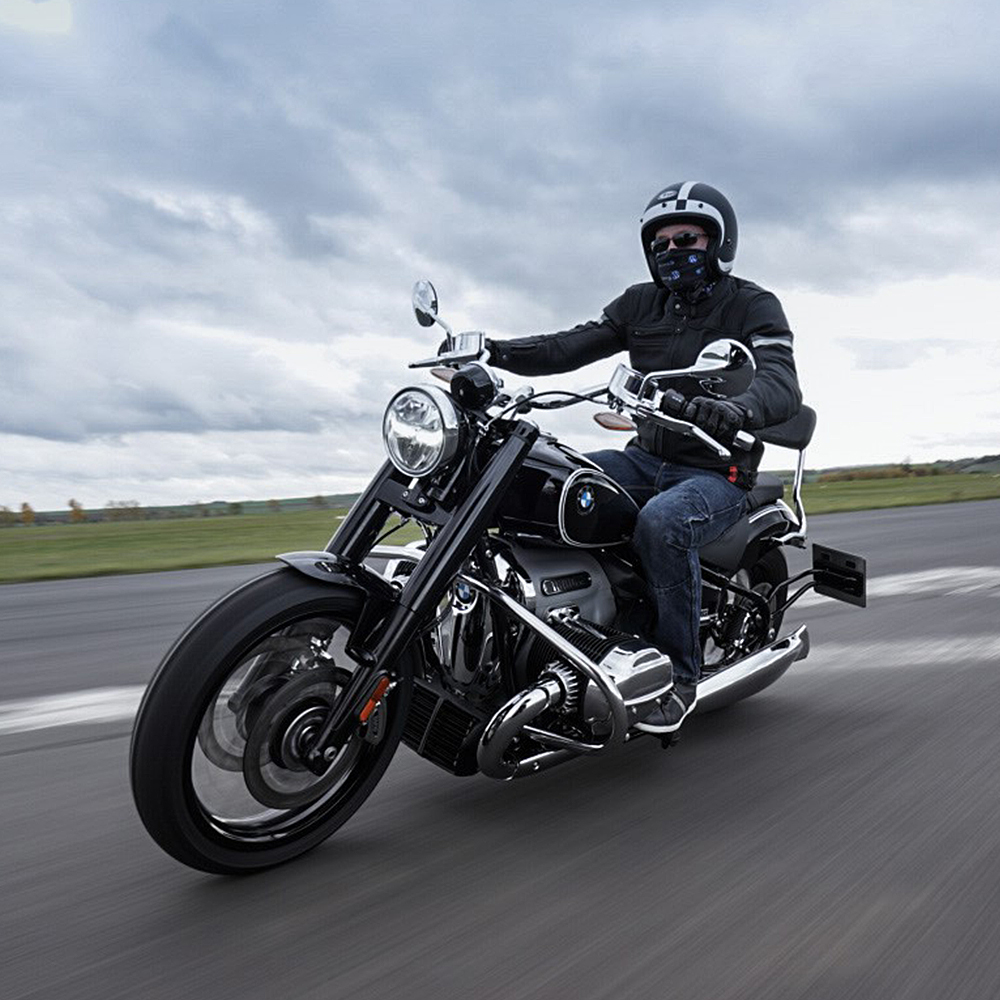 When you sit down, you are captured by the visual impact of the two cylinders of this air/oil-cooled engine, which, by the way, gives the impression that it could also make a decent aircraft engine when installed under a single-engine cowling. The physical force is felt by whoever triggers the starter. For inexperienced pilots, it is recommended to position the left leg firmly beforehand to compensate for the enormous back torque of the Boxer. Once parried, it is a pleasure to impressively twist the Big Boxer from the noticeably lively idle speed into spin with the throttle stick.

What then follows while driving is a revelation compared to the usual suspects of the established cruiser world. The classic seating position, with the feet placed on the rests in front of the pelvis, allows for an active, confident and relaxed ride on a gigantic torque wave. Very, very sovereign. The difference to the competition is undoubtedly the chassis, which circles stoically and torsionally stiffly until the end of the lean angle. Three three hundred brake discs, the handbrake partially integral, anchor reliably.

The R 18 complements the typical characteristics of a cruiser with the virtues of a BMW. This is exactly what distinguishes this motorcycle, what makes it better and what distinguishes it from its American competitors: safe chassis, decent brakes, no twisting of the frame, predictable and good-natured.

The above-mentioned value that surrounds the R 18 is due to the noticeable quality, the coherent appearance and the materiality. In the age of Smartwatches, it takes on the role of an analog mechanical watch, a pleasing simplicity that finds its expression in stylistic clarity and technical straightforwardness.

Anyone who is familiar with BMW history - and we know that many of you are - can read this bike, can read the history of BMW in this bike. It cites the successful history of the BMW Boxer since 1923, first and foremost the almost 100-year-old concept of the longitudinally mounted boxer with cardan drive, whose shaft and universal joints in the case of the R 18 rotate open and clearly visible outside the swing arm for the first time in a long time. Great! The pushrod tubes above the cylinders are reminiscent of the sports machines of the 1930s to 1950s. Just like the paintwork for which BMW applied the same principle that Henry Ford had used for his Model T until the end of the 1960s: the customer could choose any color, if it was black. In the case of the BMW, the white lines, drawn by hand with a drag brush, could not be missing. 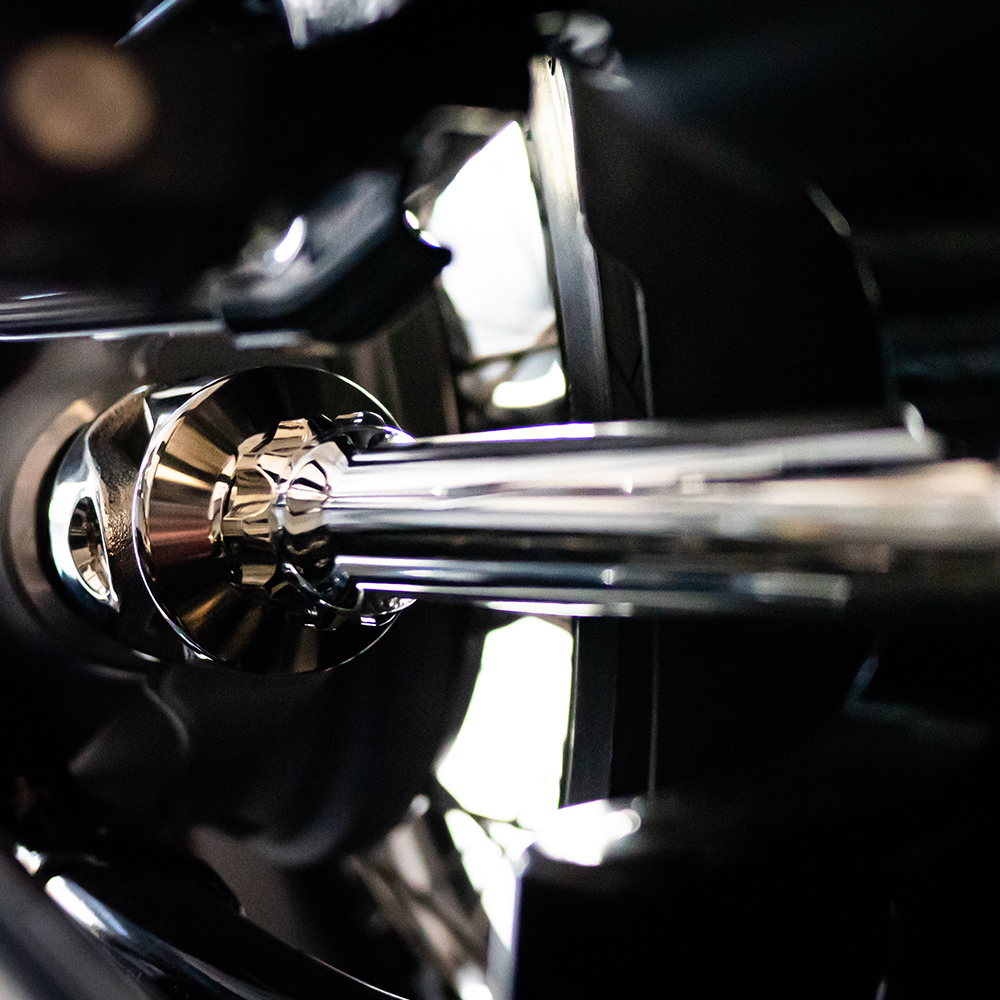 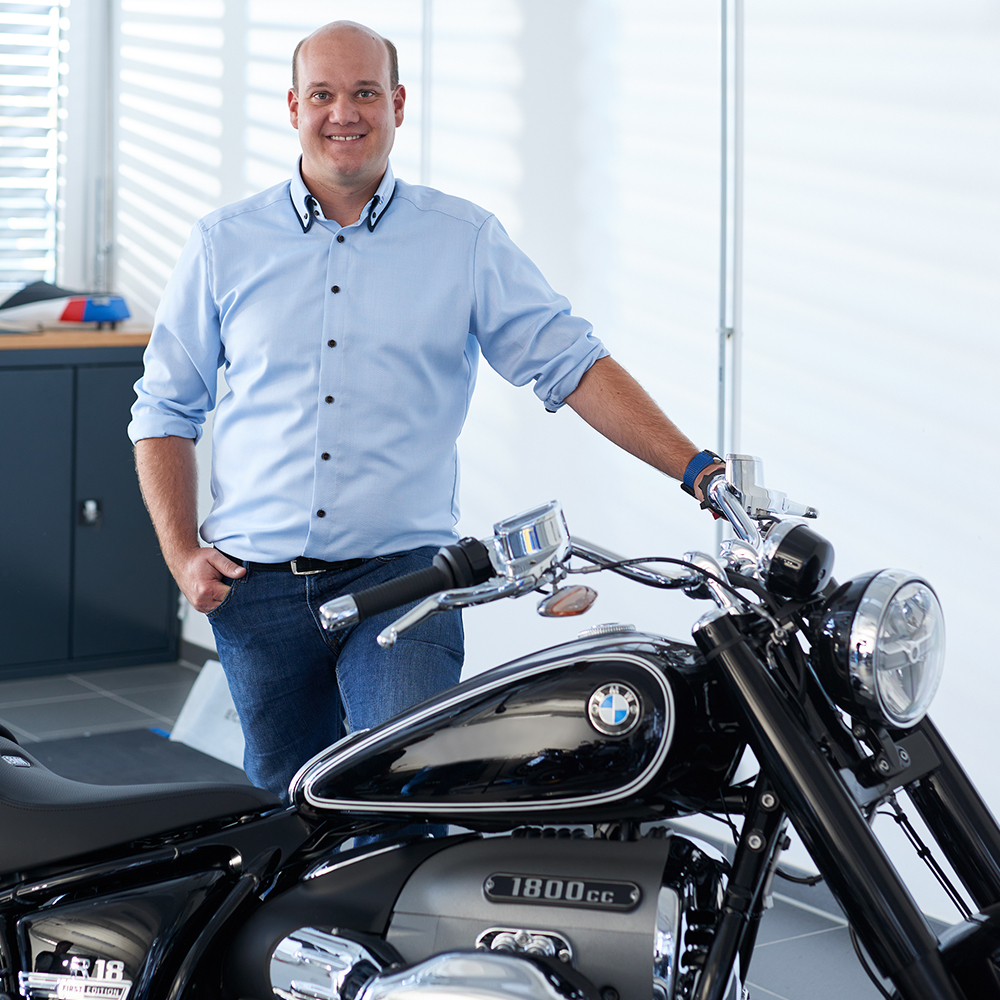 You see us quite enthusiastic about BMW's latest offspring, about this BMW, which differs from all other model series and yet remains a BMW. Our developers are very happy to develop and implement our numerous ideas for rebuilding and equipping the R 18.

But just as BMW R 80 G/S marked the birth of "the GS" forty years ago, the R 18 has what it takes to mark the beginning of a new, promising series. We will not only follow its exciting development, but also accompany it with our creative - and also crazy - ideas with BIG-BIG BOXER-SPIRIT. We are looking forward to it!

You can look forward with us!

» You'll find all components for the BMW R 18 here